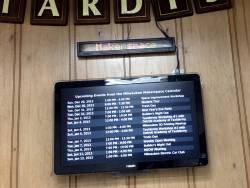 The Milwaukee Makerspace Pi-powered Informational System (MMPIS for short) is a very large television at the space with a Raspberry Pi connected to it running as a kiosk. It provides important information to the members such as, which side of the street they should park on, upcoming events, and silly quotes from the wiki. (See Also MMPIS2.)

MMPIS is currently using Screenly Open Source Edition. The image and video assets can be stored locally on the Pi, or remotely on the web. The web pages are all running on my own server.

2014-01-27 - MMPIS is malfunctioning. Pete or Chris will take a look as time allows. (The first screen is fine, so the system works, but the rest of the screens are on a server out on the Internet, which suggests the MMPIS is not properly on the network or cannot reach the server. And yes, the server is fine.)