Plastic extrusion type 3D printer with approximately 1 cuft build envelope. My goal is to print life-sized human skulls from CT scan data. The machine uses 80/20 type aluminum extrusions for the frame and many scrounged parts generously supplied by the hack-rack, Tom G., and others at the makerspace. The design is loosely based on the MendelMax (Y-axis base, extruder on X-axis boom lifted by Z-axis screws), but I am sort of designing/cobbling as I go, one axis at a time, and fabricating parts as needed to fit the other pieces I have in-hand. 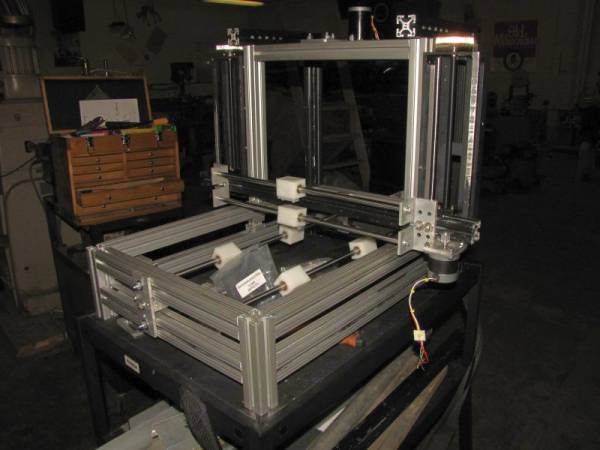 All three axes are nearly complete- just need to make the print platform for the Y-axis, and the print head(s)/extruder for the Z-axis. The X-axis is missing an idler pulley that will be added later this week. I have ordered a suitable belt and drive pulley for the Z-axis. With a little luck I'll be able to run some motion tests on the machine this weekend and see if my “precision” building practices have resulted in orthogonality of the axes and parallelism of the guide rails in each axis.

I have ordered a dual printhead from a KickStarter project that won't ship until August, so I'll start looking for another print head to use in the meantime.

I have fabricated the pulley for the far end of the X-axis, and the belt and drive pulley for the Z-axis screws arrived today. Looking forward to some simple motion tests this weekend. Working on the print platform design tonight…

The alignment technique for the X-axis guide rails worked as planned- I screwed an aluminum plate to the bushing blocks at the non-adjustable end of the guide rails then slid the assembly to the other end and tightened the screws that hold the guide rails. Next I cut and mounted the belt and it seems like I get very smooth motion all the way across the X-axis.

I also put the belt and drive pulley on the Z-axis and found that it too moves through the full range of motion without binding and no adjustment was necessary.

I made a plate to mount on the Y-axis bushing blocks and found that the end pieces that hold the guide rails do not allow for easy adjustment of their positions. I'm going to redesign and fabricate the Y-axis guide rail end plates, possibly today.

I made a test plate for the Y axis, made a new mount for the Y-axis guide rails, installed a belt on the Y-axis, widened the slots for the belt on the X-axis.

1) the motor and far-end pulley mounts for the Y-axis don't allow for easy adjustment of belt tension. Redesign coming up!

2) aligning the Y axis guide rails parallel to each other is proving to be a problem. When I widened the belt slots on the X-axis guide rail mounts, I had to take the entire X-axis assembly apart. It went back together and the guide rails lined up with each other very easily. The Y-axis rail alignment was another story. I tried the same technique of screwing the bushing blocks to the plate at one end, then sliding it to the other end of the rails and tightening the bolts. The result was difficult sliding. I think the problem is that there is no “reference” rail to which both Y-axis guide rail mounts are bolted. The relative positions of the two mounts is at the mercy of how the frame of the machine is bolted together. Redesign coming up! 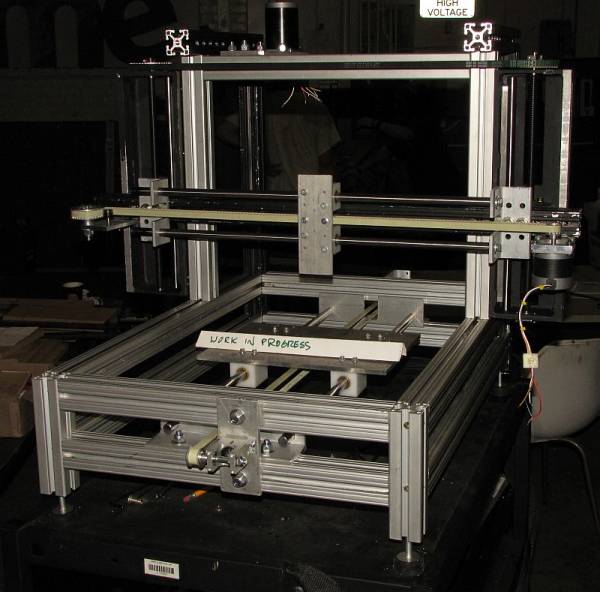 Above listed problems have been fixed. Electronics ordered, delivered, connected and tested. Problem: Marlin firmware flashed on controller board not really suitable for my printer. Solution: download Marlin, modify config.h and pins.h files, compile, and update firmware on controller board. New problem: Marlin will not compile with latest Arduino IDE. Solution: spend a week chasing problems and get nowhere. Real solution: go to 3D printing meet-up at Bucketworks, hope someone has mercy on me and can help get it working. As luck would have it, Gary Kramlich was present and has much better kung-fu than I. In 5 minutes he had located the issue, fixed it, and I was able to update the firmware. It turns out the IDE had a macro that defined a mathematical “round” function which was in conflict with the round function in the math library of the C compiler. Commenting out the macro in the IDE allowed it to compile the firmware.

Photos show how I made a belt tensioner for the Y axis (a direct rip-off of the design used for the rep-rap Mendel), and how I have used Lego bricks to mount my end stop switches. I also cut the bushings for the Y axis in half to reduce drag and ease alignment, and added a “spine” to the Y axis similar to the 8020 spine of the x-axis. 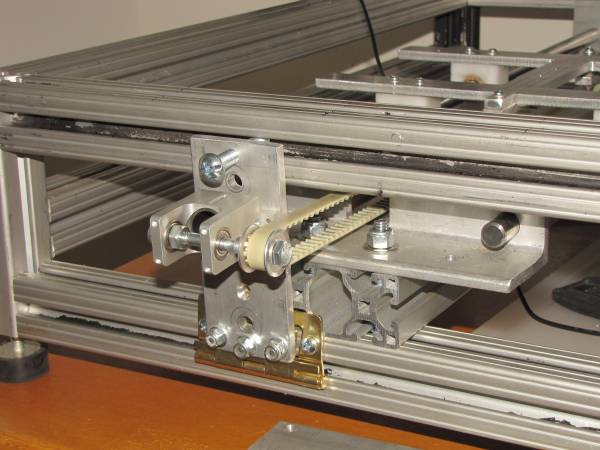 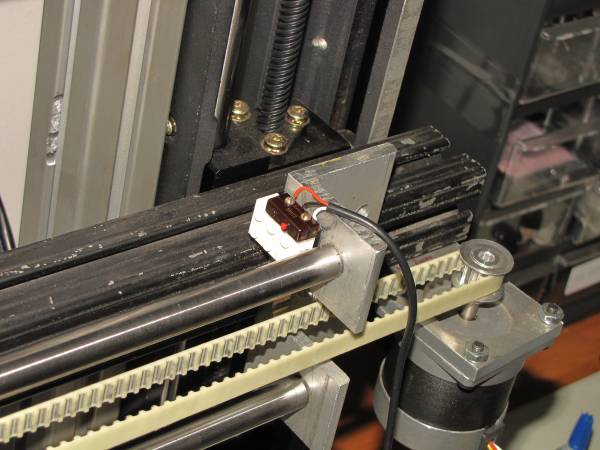 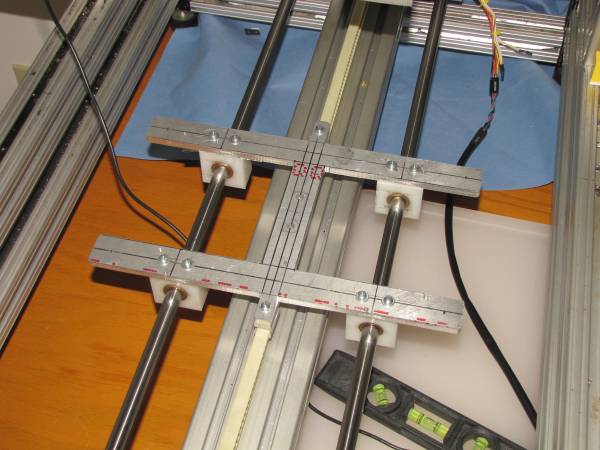 Once I have the extruder mounted I'll have to calibrate everything and that will mean updating the firmware again, but that's a pretty easy process now.

After a long hiatus for a home move, a makerspace move, and various other distractions, I was able to get back to work on MegaMax and managed the first print on it today!

Last year I ordered a dual extruder from QUBD.com's Kickstarter project. After weeks of making cables to hook MegaMax to the controller I finally hooked up the extruder last week and found that I could not get it to squirt any plastic. A quick search of the web revealed that many people had the same sort of trouble with the QUBD extruder. It seems there are two shortcomings in the original extruder design: first, the gear that is supposed to push the filament into the hot-end doesn't grab very well, at least with some brands of filament. Second, there is a screw that is supposed to push the filament against the gear, but it causes a lot of drag, and if the filament isn't very uniform in diameter, it is either too loose or too tight resulting in inconsistent performance.

The same search pointed to some modifications, printed on 3D printers, of course, to improve the reliability of the extruder. I studied those and went to the makerspace to try to print one on our Makerbot printer, but alas, the controller board is dead and I didn't want to wait for it to get fixed so…

Since I couldn't print an extruder mod I decided to make it out of aluminum. It was actually pretty easy. The modification consists of a spring actuated lever with a bearing to push the filament against the extruder gear. I used a few small pieces of aluminum, found a bearing that was about the right size in a box at the makerspace, found a spring in another box, and put together the mod in a couple hours. 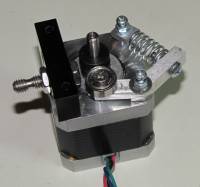 Oh yes, I also replaced the problematic gear with one of these:Trinity Labs Hobbed Gear

The first print points out a few problems, but it looks surprisingly good considering that little to no tuning has been done. To dos: insulate the bottom of the printbed to reduce heat loss to the air from that side, make a spool holder for the filament, enclose/mount the electronics and route the cables, some tuning for better quality prints.

Here's some video of the first print in progress: MegaMax first print

MegaMax was mostly a success and was finished about 4 years ago (I should really update the wiki more often). However, one of the original goals was to print ABS and after building MegaMax I learned that the printer needs to be enclosed and kept warm to print ABS reliably. That resulted in a complete redesign so MegaMax was torn apart and a lot of the materials were reused to make Son of MegaMax which has been residing at the makerspace for about 2 years.

Son of MegaMax has the same print envelope, but is fully enclosed, uses a Smoothieboard 32 bit controller, has electronics located in a drawer in the base of the printer, has a BullDog XL extruder and E3D v6 hot-end, and now uses linear guides in the X and Y axes instead of round guide rails. The Y axis is driven by a ball screw instead of a belt.

Somewhere along the way I figured out how to make a stable 3 point leveling system and used cast aluminum tooling plate for the bed. 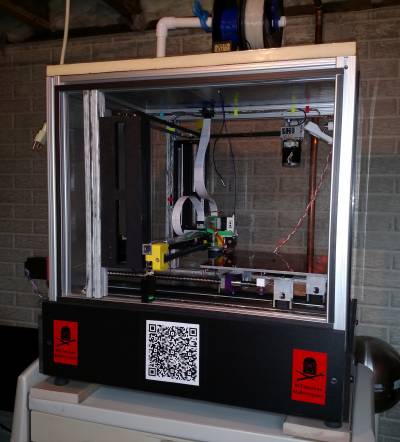 You can see and use SoM at the makerspace with about 1 hour of training.