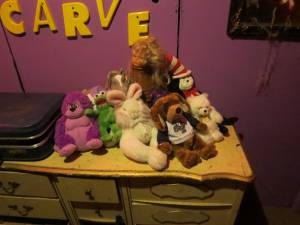 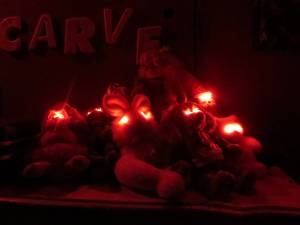 A former co-worker of mine is deeply involved (and obsessed with) his local Jaycees annual spook house. I had once suggested an Arduino driven project where a number of stuffed animals would look innocent until the lights went out. Then the “eyes” of one would glow red and blink. Then more and more would “come to life” in the same way.

He really liked the idea, so the Jaycees bought the gear and he picked up the stuffed animals. Together we mutilated them and wired up the eyes. I wrote some basic code to light them up in groups and set the timing.