In our very first paid class, Pete Prodoehl, Mike Massie and Jason Gessner covered some introductory Processing techniques and then worked with the students on a collaborative, networked sketch.

The pair of sketches were very simple. A modified version of the Processing “Getting Started” sketch was used as the broadcaster. Each mouse movement would transmit an OSC message over to the receiver, which would draw a different shape. For the workshop we hooked up several broadcasters, each using a different device and played around with that. While the results were not the prettiest things ever, the experience was fun. The simple framework can be used as the basis of more advance applications. 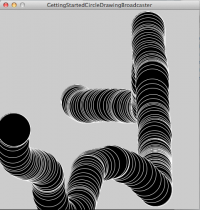 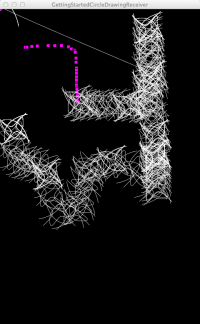