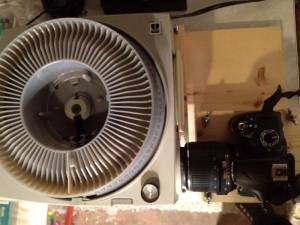 I'd been working on a device to photograph slides to convert them to digital form, and was about 75% done with it. I still had to finish the part that would hold the slides and light them from the rear.

I had prototypes, but wanted to laser-cut the final working version, which was basically a box with a light source inside of it. Getting diffused light was difficult, and ground glass is expensive. I did try to make my own ground glass substitute with finely sanded acrylic, and it sort of works, but not well enough…

I've abandoned that idea, because I saw this: http://metrixcreatespace.com/post/20108216677/diy-slide-scanner-lets-say-you-have-a-large

Below I'll post updates to this project as they happen.

I did some test shots, and they worked out well, except for the fact that I had the slides in backwards! (Easy to fix in Photoshop though.) The converted photos do not turn out amazing, but that's fine. If going with the option of the slides never being converted, or being converted less than perfect, I'll choose the latter. I plan on doing an entire test reel with a variety of slides, and I'll post some results. For now, here's a sample image that was probably taken around 1965. 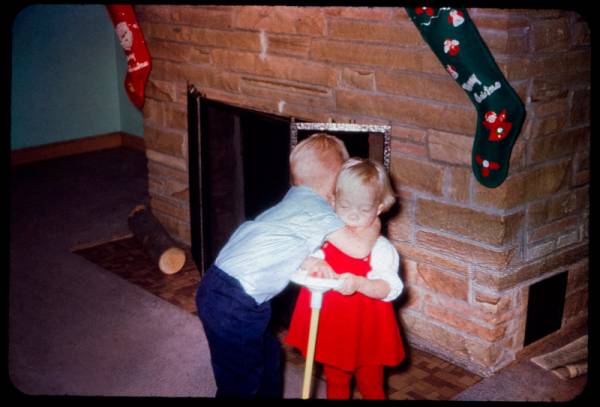 The base is done, and it now holds the slide projector and the camera. I'm still finding the exact camera/lens combo that will work the best. Once that's done I'll do some tests and then move towards automating it all. (If the tests work!)

I have most of the base done, which will hold two platforms that can be leveled with thumbscrews. Once the mechanical build is complete I will be looking at using an Arduino to advance the slides and control the camera to capture the image.