I finished making the rocket launcher and it works as designed – it puts out about six volts of electricity when I push the launch button. However, it failed to launch a rocket. It could be that the batteries were worn down or it could be that the rocket ignitor needs more power. Also, the LED I installed does not light. Maybe I wired it in backwards. The LED is not required for the launcher to work, so I will consider this part of the project done. I will try to fix the problems in the next project.

Click here to read the posts on my blog.

For years I have wanted to make a simple rocket launcher. It is a great project to learn about basic electronic circuits and it has a practical purpose – I would have a working rocket launcher to launch model rockets.

The circuit itself is very simple. Its basically some batteries for power, an LED with resistor to act as the “safe” path, a switch to power the circuit, and a button to bypass the resistor and launch the rocket. Here is a link to the schematic.

I won't get into the step by step instructions to create the launcher. You can see a similar project on instructables that will tell you all you need to know.

Here is a picture of the completed launcher. 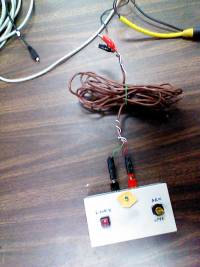 Improvement Ideas Here are some things I would like to do to make the launcher even better (meaning that it actually launches a rocket).