This is a story of a poodle. I found this poodle in an alley, frozen in its pose, glistening from the orange glow of the streetlight. Its poorly painted eyes stared deeply into mine, as if it were trying to communicate with me. “Too many cold nights in the dark alley, too many owners who no longer wanted me, this, this is the end of me.”, they seemed to say. I, too, found it rather cliche, but I could not leave it there to perish. I recall being very excited to find it. It is a conversation piece the ladies or gentlemen will ask about. However, it was still a mere statue, and after some time the bemusement was no longer enough. I contemplated disposing of it, but those eyes called out to me, “No! I'm a ridiculous artifact of the past, make me into something new, grant me new life!”. I could not resist, and decided it would make an excellent lamp. Finally, after months upon months of no activity, the day came. I found a lamp in the alley that would fit it perfect. This is a story…about a poodle lamp.

I drilled the first hole using a ceramic/glass drill bit, which was unfortunately too small for the lamp post. I think I used vaseline for the lubricant. After that I used a dremel with a diamond-coated “bling” bit to grind the hole out to size. For this, I built a small dam around the hole and periodically filled it with fresh water for cooling. I then assembled the lamp pole into the poodle.

For the shade, I used a mimeograph of a 4×6'-ish map of Milwaukee they were throwing out at work. I found two and one got destroyed in an accident, so I used that one for the shade. I like the look of the mimeographs. I also like shellac; that's why they call me Jack Shellac. In any case, I cut the map by rolling the lamp shade over it and tracing the pattern out, then tracing out again about 1 1/2“ away from the outer and inner border so I'd have something to glue over the frame. Did I mention I pulled the original shade off of the frame? I don't think I did, but you've gotta do that first. Anyway, so then you cut slits into the outer part and glue it and then fold it over the edges of the lamps shade frame. Once it's glued you just use a foam brush and brush some shellac on, I think I thinned it to like a 2# cut. Then you do that a few times, until you start feeling the shellac, then get some fresh air (no, but really, you probably don't want to be inhaling that much shellac fumes, and you have to let it dry between coats, around an hour or two at least). 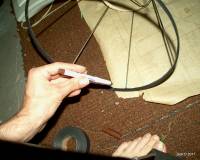 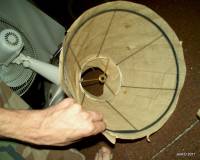 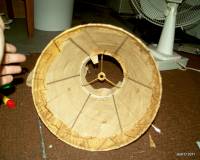 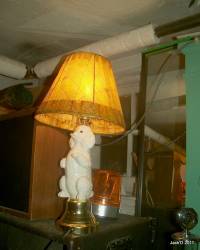 I think that's pretty much it. Also, there are pictures you should be seeing unless you're using lynx/links/elinks ( with some exceptions)