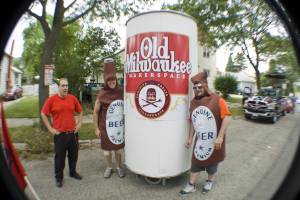 For the 2011 South Shore Frolics Parade we built a giant Old Milwaukee Beer Can and put it on a motorized platform. David then drove it through the parade and it was pretty awesome except at the very end when the outer covering fell off. Actually, that was pretty awesome too.

The float was also mentioned on a few sites:

Project Members: David Overbeck, Jason Gessner, KevinB, and pretty much everyone else!