This started out as an experiment, but it's working well enough that I might as well call it permanent. 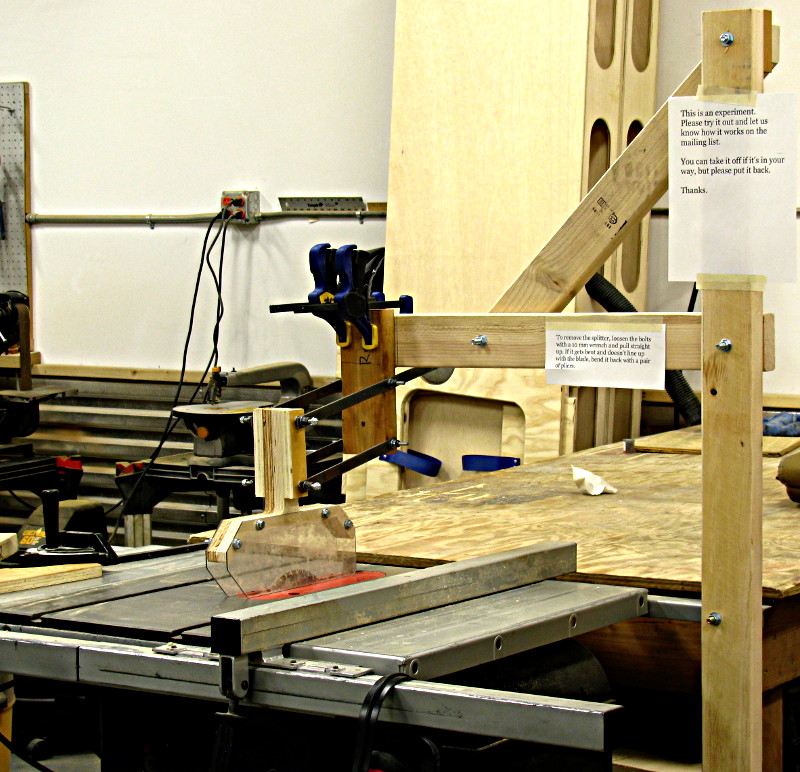 Our table saw came with a blade guard that was attached to a splitter, and every time someone moved the guard, they'd bend the splitter out of position, so it didn't line up with the blade. Instead of bending it back, people would just remove the guard and put it in some random place where we couldn't find it, so a lot of the time we were using the saw without a guard.

Over-arm type guards are available, but some people have built their own, so I decided to give it a try. The Lexan sides and the spacers between them were cut out on the CNC router (see DXF files below). Everything else was sized to fit the saw. (It's made for a 10“ blade, but for some reason we have an 8” blade on the saw right now.)

The spacers add up to 1.5“, which seems to be wide enough. The guard can be moved slightly side to side, but not enough to contact the blade. I wanted it to be as narrow as possible, because I often make cuts as narrow as 3/4”. A giant washer acts as a counterweight (it weighs about a pound). I used vibration-proof nuts on the bolts holding the guard itself together, and double nuts tightened against each other on the pivots. I also put acorn nuts on the ends of the pivots to make them a little safer.

This picture shows the first experiment, with clamps holding everything together. That worked well enough, but didn't allow wide sheet goods to be cut (hence the sign telling people they can remove it if necessary, although we encourage people to cut large sheet goods on the panel saw).

I thought we'd have to fabricate a cantilevered arm from welded steel, or maybe some of the carbon fiber tubing that's laying around. But first I built a prototype out of 2x4s, and it worked well enough that I decided to leave it that way (I replaced the last two clamps with nuts and bolts after the picture at the top of the page was taken.) The upright has a “foot” at the bottom that keeps it from pivoting around the bolt that holds it to the saw. 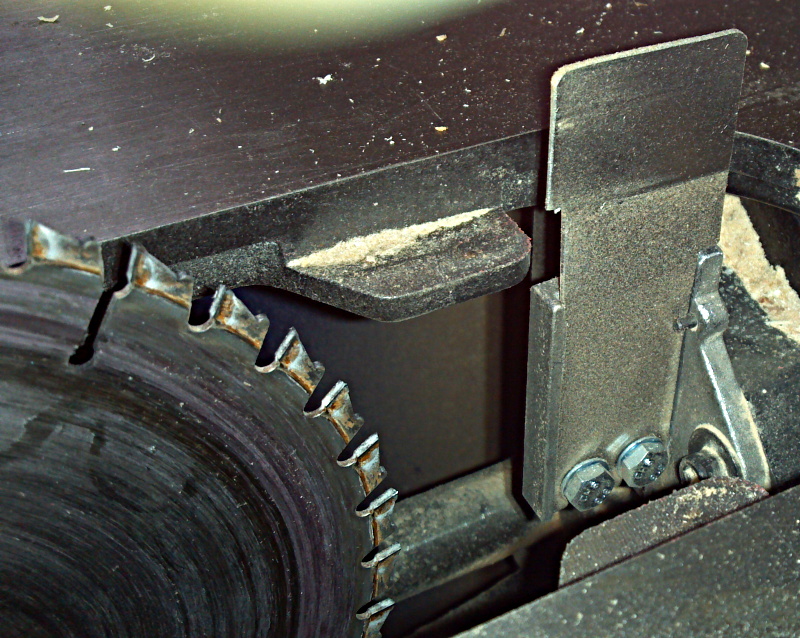 The new splitter was cut from 16 gauge sheet steel on the vertical bandsaw in the metal shop, then filed to fit, and bent with a pair of pliers to line up with the blade. It has slots in the bottom, so it can be removed by loosening the bolts with a 10mm wrench (for certain kinds of cuts that it would interfere with, such as dados). Since it's not attached to the guard, it doesn't get bent as easily as the original one.