A CNC Router Table with a minimum 4'x8' cutting envelope, made out of a mix of found / donated / purchased parts. 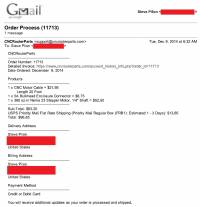 The Y-Table is the foundation on which everything sits so it needs to be nice and sturdy. The original design called for a Torsion-Box made out of 3/4” OSB or OSB. Torsion boxes are incredibly rigid and are very flat.

The Makerspace suddenly came into a large amount of 1.75“ thick x 2' 3.5” wide x various lengths plywood planks. It's hard to overstate how heavy and strong these things ares. There was also a pile of 1“x3.75” boards that were made available this would significantly save on lumber costs.

The first part that needed to be done was a table frame for the torsion box to sit on. Original design called for simple legs with angle supports, but we had so many of the thick plywood boards those were used for the legs itself as well. You could easily park a car on top of this thing.

The beginning of the table frame. Notice the double boards in the middle (which were glued and screwed together) because the table would be completely open underneath to allow storage of plywood for routing. 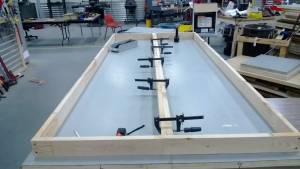 Here is a shot of one panel already screwed into the side of the table frame, cross members glued and screwed in, and a 9' foot section sitting on top. 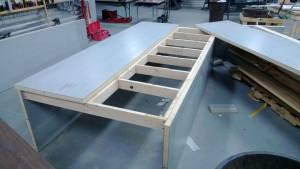 Another shot from the backside showing the back forming the C style support structure. Many screws were used and offset across the top. 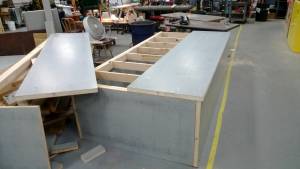 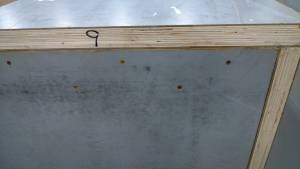 The top you see here is actually the bottom half of the overall torsion box. The torsion members needed to be cut with a dado seen here: 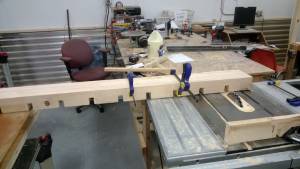 They'll be placed in a grid pattern of interlocking members like shown. 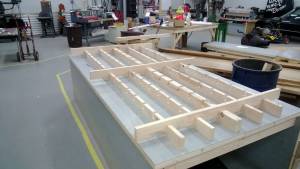 This is the torsion box complete, being glued down to the table with some scrap wood being used to weigh it down to spread the glue. 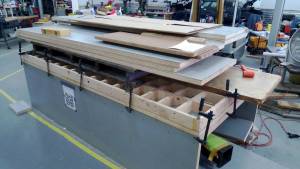 However, since this is going to be a vacuum table based system, we are zoning off areas of the table and drilling inch wide holes through particular members to allow a suction system.

The brackets attaching the Y-axis rail to the table is angle iron which bolt holes machined in. 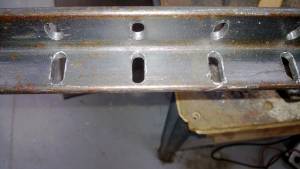 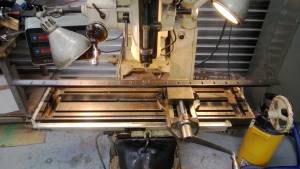 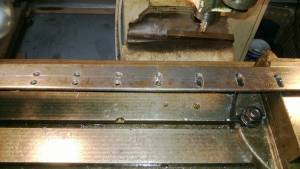 The brackets then needed to be cut on the horizontal band saw. 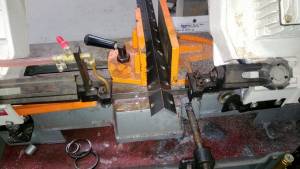 Here are some of the brackets cut and filed. 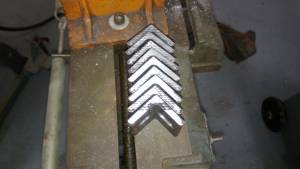 Mounting the rail with the brackets 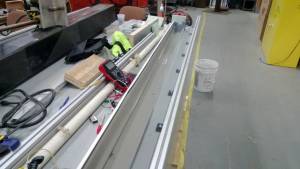