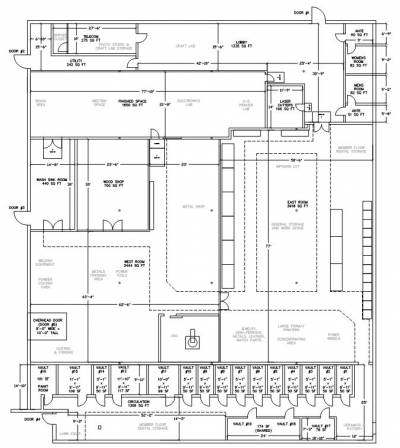 The building was originally built for “Krambo Food Stores” and opened for business on April 20, 1962. Krambo, a division of Kroger Co., was named after the chain's proprietors, C.L. and I.S. Kramlich. You can read more about the Grand Opening in this article in The Milwaukee Journal. The store's old parking lot is now home to the McDonald's, the previous entrance is now the vaults area, the wood shop and welding area were the produce department, and the carpeted area used to be the meat department. Several other features of the original building still remain including trenches and floor openings for refrigerated cases and the hydraulic pumps that used to work the automatic doors.

DataShield, Inc. was founded by a real estate executive named John O'Malley in 1978. The company was one of the first groups to offer disaster planning for commercial computer users. They provided “backup shell facilities” which had ample electrical service, backup generators, cooling, and phone lines for clients to keep their businesses running in the event of a flood, fire, or otherwise. They outgrew their original Greendale location and in 1982 expanded into a second building on Lenox St. The building offered two large data center rooms with raised access floors, anti-static carpet in the office areas, and secure off-site magnetic tape storage vaults. You can read an article on DataShield's operations here. In 2008, the Bay View Compass ran an article on various nondescript “mystery buildings” around town and Lenox made the list. You can read their article here.

We discovered the property in July of 2012, decided to purchase it in September, closed in October and officially took occupancy in January 2013. More about our history in this building can be found at the History of Milwaukee Makerspace page of our wiki.