LAYZOR!!! is a laser light show projector made with scrounged parts and designs and software from the Web. 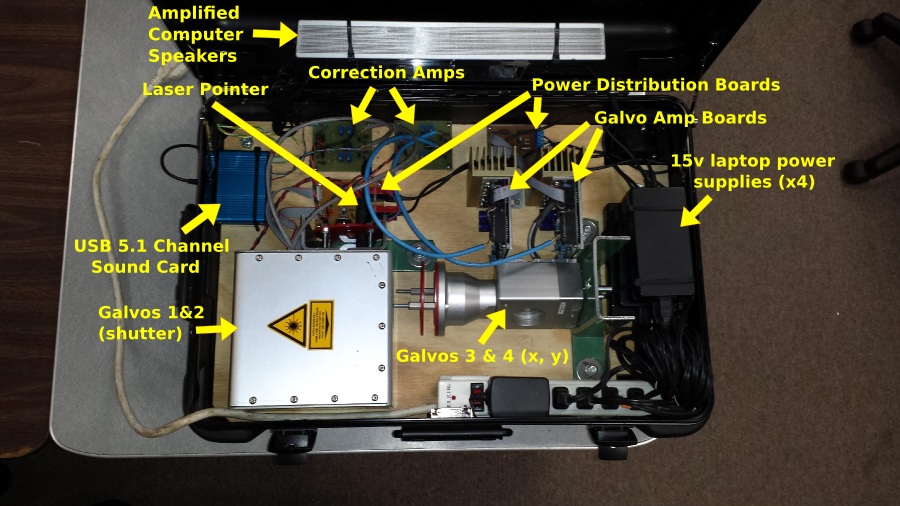 This project started when Tom Gralewicz showed me a pair of X-Y galvanometers in his junk box. I decided I could make a laser light show projector with them, so I browsed around on the web and came across several designs based on hooking a USB sound card to a computer to generate the signals, and some software that had a really cool demo of programatic control of a laser using this technique. Thus was LAYZOR!!! born.

LAYZOR!!! uses a USB 5.1-channel sound card as a DAC to generate signals to a set of galvanometers, which deflect the beam from a green laser pointer in X & Y to draw animations on a screen. I've used the channels as follows:

The sound card generates a 2.4±1.2v signal, whereas the galvanometers expect a -10-10v input, so the signal has to be routed through a correction amp to offset it by -2.4v and amplify it by about 8x. The correction amp boards are based on this schematic, modified slightly to use the components we had on hand at MMS, as follows: 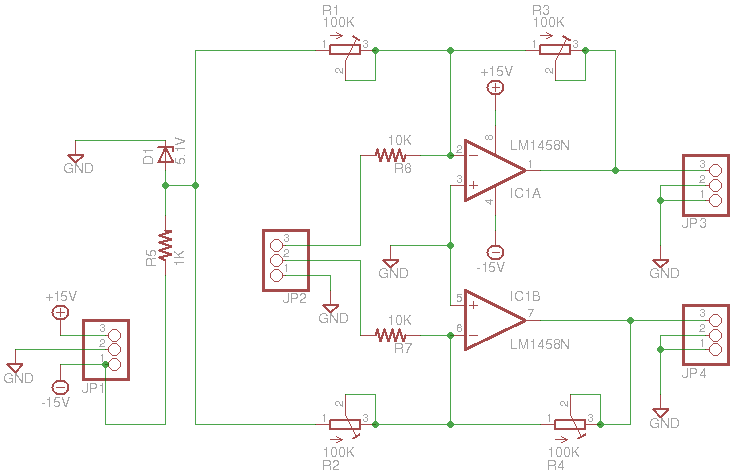 The galvos are made by ScanLab GmbH, and use SSV30 amplifier boards. They were originally used in a laser marking system (with a powerful IR laser) for labeling crates as they passed by on a conveyor belt. I managed to find a manual for a similar model of galvos that use the same board on a Chinese web site. From this I was able to figure out the pinout of the connectors, and determined that they needed a ±15v@1.5 amp power supply, and were controlled by a -10v to +10v analog signal. I repurposed four 15v Toshiba laptop power supplies from the MMS Hack Rack to power the two sets of galvos.

The laser source is a Radio Shack green laser pointer. I stuck with a 5mW laser because I didn't want to risk blinding myself or others. Because this is a diode-pumped solid state laser, it takes a bit of time (maybe 10ms) to turn on. This meant I was unable to effectively PWM the power input to modulate it, so I decided to use another galvo pair to aim the beam either at or away from the X-Y galvo. This is shown as Galvos 1&2 in the diagram above. The Y galvo of this pair is just used to center the beam vertically on the X-Y galvo pair's mirrors, but the X galvo is modulated using channel 5 of the USB sound card to either direct the beam toward or away from the X-Y galvos. The beam is passed adjacent to a razor blade (just to provide a nice sharp edge with no diffraction), and can actually be partially occluded by blade to attenuate the beam, giving me an analog intensity channel.

The software I'm using is called OpenLase, by Héctor Martín Cantero (a/k/a marcan). He describes it on his blog. I also played around with the LaserBoy. LaserBoy is more geared toward building pre-made images and animations which are then played using an audio player, whereas OpenLase allows me to programatically draw animations in real time with the laser.